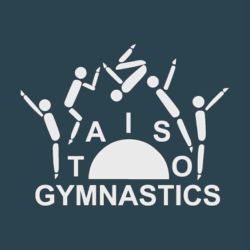 Taiso has three gymnasts studying at and competing for US colleges, NCAA Division 1.  Wyatt Tyndall is at Penn State, Mitch Tyndall is at the University of Nebraska, and Joel Gagnon is at the University of Minnesota.  It is absolutely amazing that three of our boys are competing in the biggest college sports system anywhere in the world. This section will provide information and updates on each of the gymnasts, from articles, to facebook pages, etc. 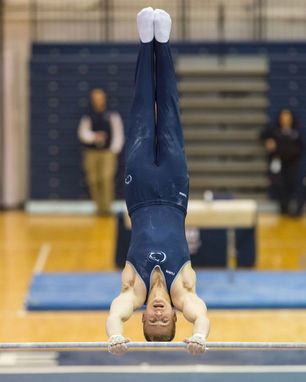 CAREER HONORS
Academic All-Big Ten (2017)
First Team CGA All-American Scholar-Athlete (2016)
CAREER BESTS
EventScoreDateSite/Opponent
Floor Exercise14.5501/21/17Army
Vault
14.9503/4/16at Arizona State
Parallel Bars14.7502/13/16at Ohio State
High Bar14.3003/11/16Nebraska 2017 (Sophomore Year)
Competed in four events in his sophomore season for the Blue and White … Nabbed two first-place finishes with a title on the floor exercise against Army (1/21) and a parallel bars title against Iowa (3/25) … Placed third on the floor exercise at the Big Ten Individual Event Finals (4/8).
2016 (Freshman Year)
Competed in four different events in his freshman season as a Nittany Lion, primarily on the floor exercise, vault and high bar … Garnered nine top-five finishes in the 2016 season … Tied for second on the vault against Army West Point (1/9) and placed fourth at the West Point Open (1/15) … Also finished fourth on the vault at Arizona State (3/4) with a season-best 14.950 … Placed fourth on the parallel bars at Ohio State (2/13) with a season-best 14.750 … Scored matching season-bests 14.300 on the high bar against Nebraska (3/11) and at the NCAA Championships (4/15) … Participated in his first NCAA Championship on the vault and high bar for Penn State.
Gymnastics Background
Trained at Taiso Gymnastics Club while attending Holy Cross High School … Was a member of the Canadian National Team and was a three-time Provincial all-around champion … Notched the 2012 Kyle Shewfelt Invitational all-around championship ... Took home the silver medal on the floor exercise at the Canadian National Championships in 2012 and was named the Gymnastics Saskatchewan Men’s National Athletes of the Year … Trained in both Belgium and Colorado Spring, Colo. … Earned Principal’s Honor Roll with Distinction all four years of high school.
Personal
Full name is Wyatt James Tyndall … Born Nov. 24, 1996 … Son of Don and Janice Tyndall … Has two brothers, Mitch and Jesse … Majoring in health and human development 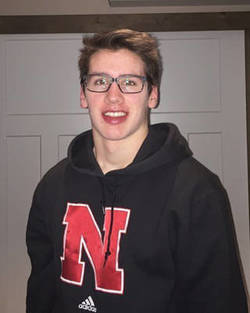 Tyndall joins Zach Peters (Greenwood, Ind.), Griffin Kehler (Frisco, Texas) and Jonathan Scripnick (Milton, Ontario) who signed last November with the Huskers, as incoming freshman in 2018. This is the second consecutive year that NU signed at least one gymnast from Canada, after Jake Bonnay joined the Huskers in 2017. Prior, Nebraska’s roster hadn’t included a Canadian since Martin Fournier (St. Hubert, Quebec), who was a Husker from 1999 to 2002.

“Mitch Tyndall is a dynamic and powerful gymnast who will help us on all six events immediately,” Chmelka said. “Mitch also excels in the classroom and I am honored and proud to have him join our team.”

A 5-7 all-arounder, Tyndall competes for Taiso Gymnastics Club under the direction of Coach Markos Baikas. Tyndall’s impressive resume includes a top finish in the all-around at the 2015 University of Calgary International Cup, as well as a first place all-around finish at the 2016 Peter Vidmar Invitational in Los Angeles, Calif. Additionally, Tyndall claimed the Provincial All-Around Title in 2015 and 2016. Tyndall was also a member of the Canadian Junior National Team from 2012 to 2013.

“I chose Nebraska because of the integrity of the coaching staff and the great group of guys that make up the team,” Tyndall said. “Nebraska offers everything that an incoming freshman looks for.”

Tyndall is the son of Don and Janice Tyndall. He has two brothers, Wyatt and Jesse. Wyatt is sophomore on the Penn State gymnastics team and Jesse is a member of the Canadian Junior National Team.

Tyndall attends Holy Cross High School where he is a four-time member of the honor roll. Mitch also played baseball, football and hockey. In his free time, he enjoys dirt biking, fishing, wakeboarding and hunting. 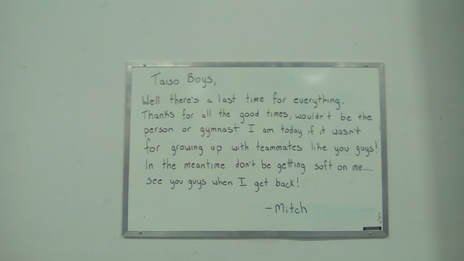 ​Mitch was recently in Saskatoon, training at Taiso.  On his last day of training, Mitch left this note on the whiteboard.  Very apparent his heart is still at Taiso.  Have a great season Mitch!
Huskers Claim All-Around Title at Season Opener
​January 22, 2019

Colorado Springs, Colo. - At their season opener, the Nebraska men's gymnastics team claimed three event titles and had a number of career-high scores.

Taiso's Mitch Tyndall had an impressive night on parallel bars, scoring a career high 14.00. Mitch also had a score of 13.05 on pommel horse and 12.95 on rings.

Up Next
The Huskers take on Penn State in State College, Pa  on Saturday, Jan. 26 at 3:00 p.m.  THIS WILL BE A FAMILY AFFAIR!  MITCH OF NEBRASKA AND WYATT OF PENN STATE!
The Tyndall Trio, by Dani Dean
Written for https://ohiostatebuckeyes.com, April 4, 2019
Checkout the article written on the three Tyndall brothers, Wyatt, Mitch and Jesse who will be competing in the NCAA Big Ten Gymnastics championships, April 5/6, in IOWA City, IOWA. Click on  https://ohiostatebuckeyes.com/the-people/the-tyndall-trio/.
​
Coverage is provided by the Big Ten Network,   http://btn.com/.  Coverage beings Friday, April 5, at 6 pm Saskatoon Time.  Coverage on Saturday, April 6 begins at 6 pm Saskatoon time.

Wyatt Tyndall in Friendly Competition with his Brothers
With brothers competing on opposing gymnastics teams, Wyatt Tyndall will have an interesting competition ahead of him at Big Tens and NCAAs. His brothers, Jesse and Mitch, compete for Ohio State and Nebraska, respectively. The Canadian trio has always incorporated gymnastics into their lives, training under the same coach, Markos Baikas of Taiso Gymnastics, who has worked with them since they were each 5. Read Wyatt's full story HERE 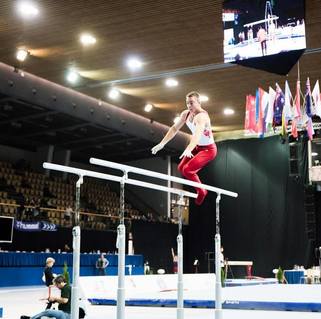 A huge congrats to Joel Gagnon for being selected as the Sask Sport Inc. April Athlete of the Month recipient!!

During the 2016 World Cup Challenge in Hungary, Gagnon successfully executed an element on the parallel bars that no other gymnast has executed. On April 4, 2017, the World Gymnastics Federation (FIG) selected Gagnon’s element as one of eight to be added to the Men’s Gymnastics Code of Points. The Gagnon element is a skill on parallel bars that is described as a basket roll backwards, with tuck salto half to upper arm hang and recognized as a C element. FIG has named this element “the Gagnon”.
​
​ 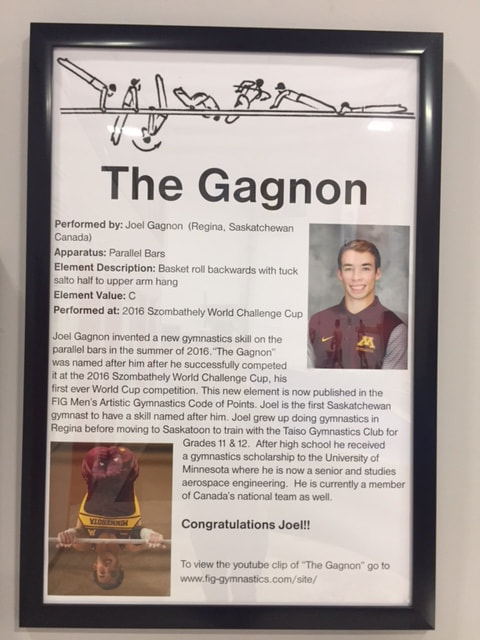 "I'm so happy for Joel being selected as a finalist for the Nissen-Emery Award. He certainly embodies the qualities of an outstanding student-athlete," head coach Mike Burns said. "He excels in the gym, in the classroom and in his life. He is a man of great integrity and is a great role model for the rest of the young men in our program. Minnesota gymnastics is better for having Joel in our program."

Gagnon is a three-time captain for the Gophers and is a two-time All-American on floor exercise. As just a freshman he broke the school record on floor with a 15.60. He helped lead the Gophers to the NCAA team finals in 2016 and 2017. He was also the school’s recipient of the 2017 Henry Williams Legacy Scholarship given to the top male student-athlete at the University of Minnesota.

Not only does Gagnon compete for the Gophers, but he is a current member of the Canadian National Team. He led Canada to the Bronze Medal at the 2016 Pacific Rim Championships.

As a team representative on the Student-Athlete Advisory Committee for three years, Gagnon has put in over 50 hours of community service. He has helped organize team community service outings at Feed My Children for three years. On top of all this, Gagnon even has two skills name after him in the FIG Code of Points. He successfully competed two new parallel bars skills in separate international competitions called the Gagnon 1 and Gagnon 2.

Gagnon is one of seven finalists for the 2018 Nissen-Emery Award. Minnesota has had four individuals named the award winner. National Champion Ellis Mannon was the Gophers’ most recent award recipient in 2015.